Now for the notching of the frames for the stringers and the chine. 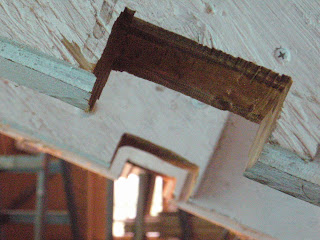 The frames were notched 1.5" deep by 3.5" wide to receive a DF 2x4 stringer from stem to stern and from the keel to the chine on about 18" on center. This I did by putting multiple blades on a skill saw and cutting back and forth till the notch was made. After the notching was completed I placed tar in the notch and clamped on long 2x4's and nailed and screwed the in place.  Lot of work over head but with the sand and sawdust floor it was easy on the knees. 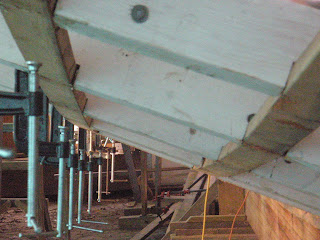 Now to the Chine. As you see the frames were notched for the chine on the frame table. THIS IS A HUGE MISTAKE IN MY OPINION. I found that most of the pre-cut notches were not even close and had to be re-cut. They also made the laying out of the chine more difficult.  I wasted a lot of time using this method. if I was to do this again I would not cut the notches in the frames till they were in place. Then run a batten around the boat where the chine is to be cut in. Mark it and cut the notches then. Much easier!!! 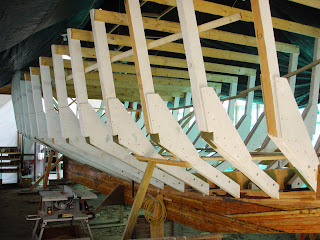